Welcome to my LJ.

This happens to be a freinds only LJ.

If I where to start using this LJ thing again, would anyone actually read/comment?

The Furball Run 2009 from Mustan on Vimeo.

Heres my video of The Furball Run!

I dont usualy get the bus, i walk. However, on arriving at the footpath that cuts a good mile or two off the car route, i was greeted with reams of blue and white tape with a lady in a police uniform. She informed me (with a tone only used by somone repeating the same sentance for the 100th time that morning) that there had been an incident and the path was closed. And thanks to the rail line that the path goes under, theres no way round unless you walk a mile in ither direction.

I'm going to be late for work.

Well that’s the bank holiday weekend over, and I've been working for all of it. I have a rather busy week ahead of me too (in case you hadn't already guessed that from the title of this entry).

I'm working all week other than tomorrow and Thursday, however my "days off" are going to be rather more tiring than my days at work. Tomorrow I have to be in three different places, three different ends of London and the surrounding area in one afternoon. My public transport usage will be put to the test!

Thursday is even worse. I wake up at about half 4 in the morning, to get to Heathrow for 6 and then fly up to Manchester for the day. Then I return at about 10pm later that day, to be back at work on Friday. All in order to see my mums new house and take photos of it.

Oh, and on the off chance that anyone wants to get breakfast in Manchester, I'll be free from about 8:30am to 10:30am :P. Chances are I'll be spending it photographing the city's architecture in the morning sun until my mum can pick me up to ship me over to rainy Huddersfield for the remainder of the day.


In other news, I'm having a movie night tonight. I have a couple of DVDs lined up to watch. Just finished watching "Yes man" witch I bought because the original book by Danny Wallace was fantastic. Unfortunately the film is a hollywoodised version with next to no connection to the original story, and a rather crummy script. Not so much based on the book, more... a bastardised copy of the original idea but then set in Los Angeles (original is in London). What makes it worse is that I bought it...

I don’t suppose anyone wants to buy "Yes man" on DVD do they? Its really good, you'll love it!


Ehem, and finally a little picture! 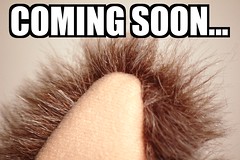 My sister is having a leaving party for her freinds and thus I am kept awake by loud teenagers relentlessly giggling.

It seems the plan for global domination is going well. Soon my children, sooon!

Yea, sorry for the two rather consecutive posts but I've been busy and I've got some photos for ya. There will be more soon, as well as the photos that Ravell helped me out with but for now, ( Collapse )

Over the last few days I've had a few furry themed encounters outside of the fandom itself. It all started a couple of days ago when I went back to the local gift fair type thing to see the new stalls (they put new stalls up every week). I saw another carved wooden horse, this time Chinese and not native American. It was smaller and more expensive but awesome so I had to get it 8)

I went back the next day with money to buy it. It was a little oriental lady behind the table and as she handed over the paper bag she said, very seriously "he looks like you". I duno if she meant the emotion I was currently conveying was similar to that of the carved horse or that she was trying to tell me something about the length of my face... But I smiled to myself, said something along the lines of "oh ok, thanks!" (I assume that means I took it as a compliment) and headed back to work.

Then, I think on the same day (or the one after it... my memory fails me) I was taking to a college of mine at work. I should explain she is a little lot weird. She will bust out laughing to herself in the middle of the store for no reason, dance wildly to any music that might be playing and generally ask really odd questions. Everyone at work is aware of her mental state, because there is something wrong with it... just nobody is sure what. Never the less, she is a genuinely nice person and If you take the time to talk to her, you might (after a rather abstract conversation) find out she’s not all loopy. Anyhow, I was taking to her about age and birthdays for a bit whilst getting on with some work. Then, a little time later (we had actually moved on entirely from what we where working on and gone to do something else) she came up to me and asked me "Your a horse aren’t you?"

I was more than a little... confused I guess is the best way to describe it. I seem to recall my reaction being something like "Ye...um... wha?". It was only when she further asked I was a Chinese horse, that I realised she had worked out the animal of the year I was born (on the Chinese calendar I was born in the year of the horse).

And finally, I was in the staffroom at work yesterday when this turned up...

So, for those of you on my freinds list who dont already know,

snoblissea got new fursuits. Now, I have known about Shema getting her lion suit for a rather long time now... however they kept the Sno suit from me through a vast web of "white" lies. So as sutch, I went round they're house on Saturday after work expecting to do a photoshoot of just shema. When Sno came down wearing his own lion head and paws, needless to say I was a little more than suprised :P.

Anyway, im not going to go into detail too mutch as, if im honest... im very tierd and I've had a bit of a shit day. Instead, im going to post a few photos I took... most of whitch are not very good but are better than nothing.

So, all of this tall of furcons on my lj freinds list has had me thinking. thinking so mutch, infact, that i intended to go to bed like... a couple of hours ago. Ive been spending all this time looking at the Confuzzled, RBW and Eurofurence websites, as well as contemplating my money situation.

Usualy this wouldnt be a problem. It would be decided for me by my lack of money. However, now im working and finaly have some money, you have no idea just how tempted i am to click the "Register!" button.

But im supposed to be saving. The plan was thus:

Work.
Save.
Work more.
Save some more.
Buy plane tickets.
Get out of the country for a while.
Come home.
Learn for two more years.

Like... litrally every fur i know has been or will be going to a con this year or next year. For a little while i had the crazy idea of going to AC while over in america but thats kinda out the window now. I duno. Thoughts?
Collapse